Pande and coauthors: Who is being excluded by India's vaccination strategy?

July 20, 2021: Yale's Rohini Pande and Charity Troyer Moore and coauthor Simone Schaner use survey data to show that reliance on a digital registration process means that women and the poor have less access.

Of the 376 million Covid-19 vaccine doses that India had administered as of July 12, men had received 202 million, while women had received only 175 million. This gender gap in vaccine rollout exceeds the extent to which men outnumber women in the population, and is due to a number of factors, including the methods by which people can access vaccines. India is largely relying on digital tools to allocate vaccines, and men have greater digital access than women. Our analysis of survey data shows that India’s digital divide operates along lines of class as well as gender, putting the poor and women at greater risk.

To this point, any adult must use one of three digital portals – Aarogya Setu, Umang, or Cowin – to register for a vaccination appointment. These are meant to triage potential vaccine recipients, increasing efficiency and providing real-time information both to citizens (on vaccine availability and appointments) and the government (on vaccination progress). Older adults (age 45+) can receive vaccinations through on-site registration, but need a phone number to complete the registration process.

Pre-registration requires access to a smartphone or Internet, and sufficient digital fluency to set up a username and password, navigate through a timed, texted PIN verification process, and upload documents to the portal. Borrowing someone’s smartphone to register is complicated because the app does not allow anyone to register more than four individuals per ID – so larger households will require multiple user IDs.

Researchers at EGC and Yale MacMillan Center are conducting large-scale surveys to understand the effects of the pandemic on poor and marginalized communities.

This process is beginning to divide Indian society into those who will get vaccinated sooner – the older, the economically better off and the more educated and, then, those who are economically worse off and, now, at greater health risk because of digital exclusion.

Who are India’s digitally excluded? Nationally representative data from the 2018 Financial Inclusion Insights (FII) survey, which covered nearly 50,000 individuals across India, tells us that while over three-quarters of Indians have access to a phone, only 17% have a smartphone. A similar number – 17% of respondents – had ever downloaded an app, and 23% had ever conducted an Internet search. While digital activity has grown since 2018, major gaps surely remain, particularly for the traditionally marginalized.

Millions in India, particularly women, altogether lack internet access. And, right now, this inequality of access could determine who lives and who dies. 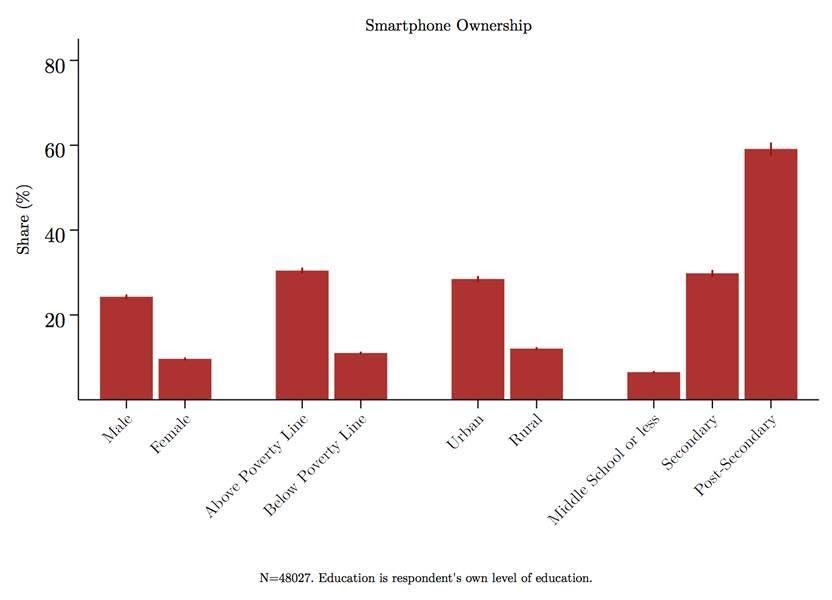 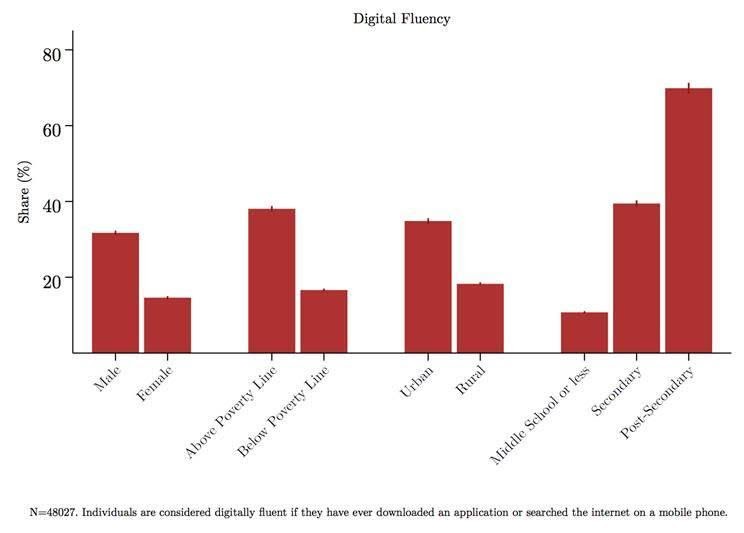 Turning to gender, 75% of Indian men, but only 45% of women, reported owning a mobile phone. More relevant to the issues at hand, 24% of men, compared to under 10% of women, owned a smartphone, and 32% of men, but only 15% of women, were digitally fluent. Clearly, many women will depend on men to determine whether they receive vaccines.

What does it look like to be on the other side of the digital divide? Asha is a young migrant worker who, having witnessed Covid rage through Delhi, started searching for a vaccine in May. Because she is over 18 she is eligible for a jab. But because she is under 45, she cannot register in person at a local facility and must instead negotiate a complex web portal to reserve her spot in line. This is impossible for Asha, as she is illiterate. She also can’t fully outsource registration, which is linked to her phone number.

For now, Asha’s way out of this bind is to go to the house of a literate, well-off vaccinated couple twice a day so they can assist her in operating her own phone and trying to register. Even with this help, the system is complicated, though she has now successfully registered.

Learn more about migration during the Covid-19 Pandemic

The second South Asia Development Dialogue explored the effects of pandemics – past and present – on migrants and other vulnerable groups in South Asia.

Asha is lucky, as millions in India, particularly women, altogether lack internet access. And, right now, this inequality of access could determine who lives and who dies. And it's not just the fate of individuals that's in question here. If more affluent neighbourhoods consistently see high vaccination rates, and poorer communities are seeing few individuals vaccinated, even when India eventually hits overall vaccination rates that should, in theory, confer herd immunity, we could see new waves of the virus sweeping through these poorer communities – even as the rich are spared.

The problem with India’s approach is not that it is digital – there are excellent reasons to maintain a database that links individuals to contact information and vaccination status – but that for many it is digital only. A hybrid model that couples digital platforms with mediums that more readily reach the poor can begin to address accessibility inequities.

How could this work? People without smartphones could be allowed to pick up a physical ticket that secures their place in line for a vaccine at their local clinic, or health workers could help individuals pre-register with just a phone number. Appointment notifications could be delivered through SMS and automated voice calls, which are more likely to reach the 38% of Indians that have basic phones and some digital fluency. In our own research, automated calls to low-income, low-education populations have proven an effective means of contacting these households. Key to making this approach work would be working with the whole range of frontline workers – which extends beyond health workers to include local government officials, leaders of women’s self-help groups, and health workers – are fully vaccinated so they can reach the most marginalized with information and support to obtain vaccines.

India’s Supreme Court recently noted that the government’s registration requirements for Covid vaccination were too rigid, and asked for greater flexibility. Our research shows that a new approach is needed to reach the poor, particularly women. Upgrading the current digitally driven plan to a hybrid model is an essential step towards meeting this challenge.