The Indian government has rolled out an emergency COVID-19 relief cash transfer program that will send Rs 500 per month from April-June 2020 to women via PMJDY accounts. PMJDY is a program launched as a National Mission in August 2014 to provide universal banking services to every unbanked adult. We combine government reports of PMJDY ownership and data from the nationally representative 2018 Financial Inclusion Insights (FII) Survey to: 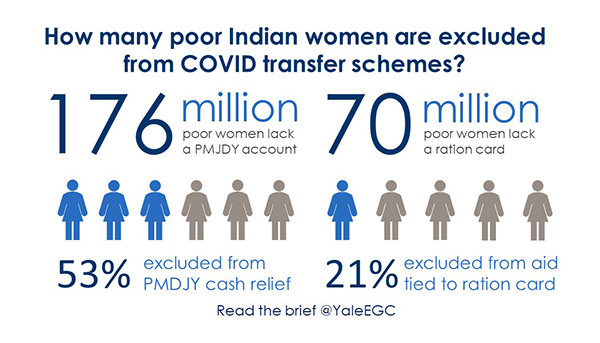 We find that more than half of poor women are likely excluded from the cash transfer program. Furthermore, one in five poor women live in households that lack ration cards, which typically grant access to the central food ration system.

To identify poor households, FII uses a Grameen Foundation methodology where answers to 10 questions about a household’s characteristics and asset ownership are scored to compute the likelihood that the household lives below the poverty line. Table 1 shows that FII projects that 69% of adult women live on less than $2.50 PPP per day. The poverty estimates square well with other FII vulnerability indicators. For example, among women below the poverty line, 86% say it would be very difficult or somewhat difficult to pull together 6,000 Rupees within a month to deal with a medical emergency.

A Case for Universal PDS and community kitchens

This Policy Brief was a collaborative effort by EGC, Yale MacMillan Center and the University of Southern California Dornsife Center for Economic and Social Research.

To read a companion brief summarizing results from interviews of women in rural India focused on challenges they and their families face as they confront the COVID-19 pandemic and associated lockdown, click here.

World Bank Female Population Age 65 and above, 2018. Retrieved from https://data.worldbank.org/indicator/SP.POP.65UP.FE.IN?locations=IN.