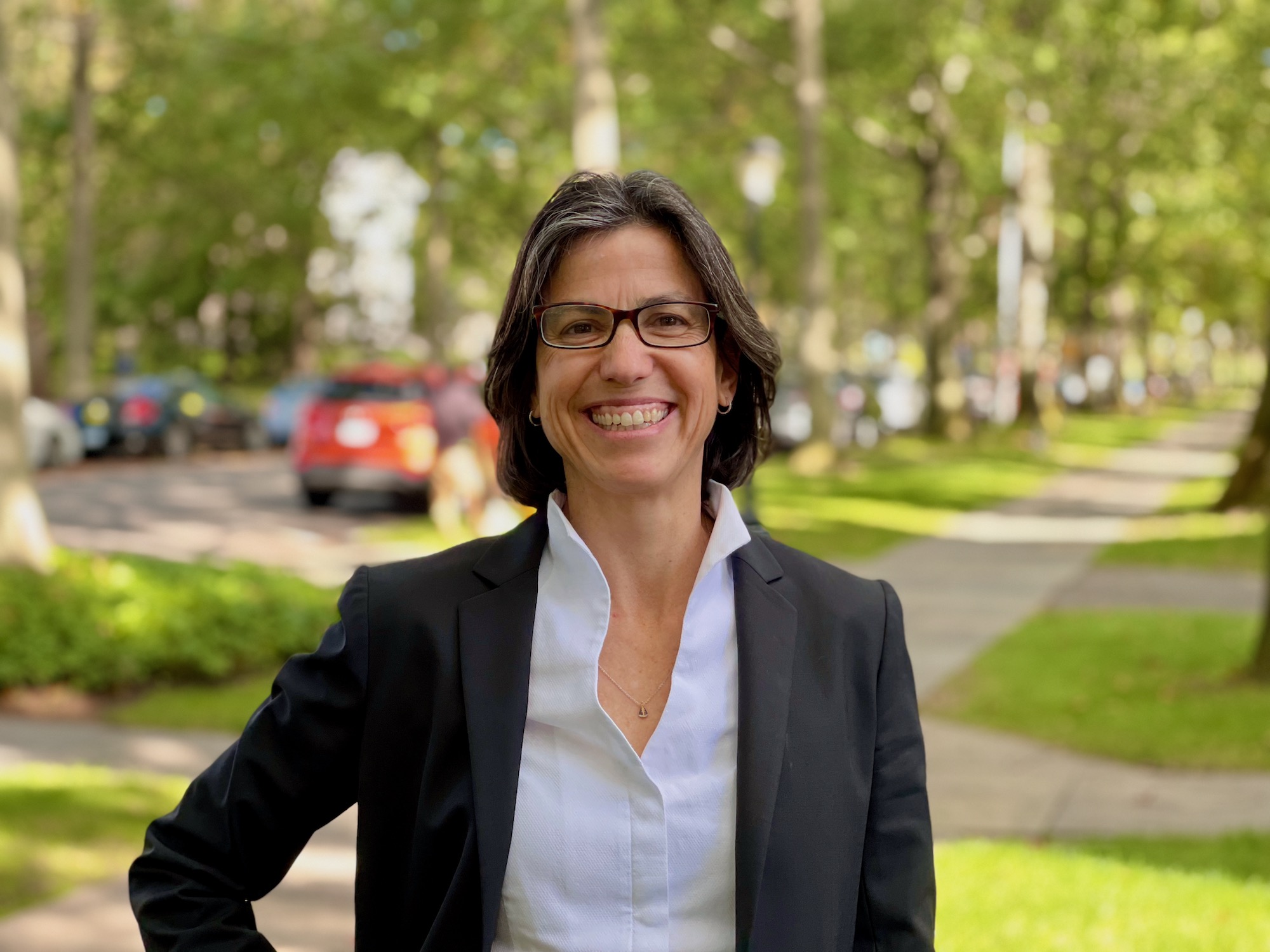 Economic development is often measured at the national level, yet many of the activities that generate growth occur through firms. Businesses invest in labor, capital, and technology, and their improved productivity helps increase profits and wages, boosting economic activity and raising living standards. As firms advance, they often trade on foreign markets – which can amplify growth and development, both within their country and throughout the global economy.

As a native of Brazil, Ana Cecília Fieler – a lecturer in Yale’s Department of Economics and an EGC affiliate – has seen these dynamics unfold firsthand. Fieler was an undergraduate studying mechanical engineering in the 1990s when trade liberalization opened Brazil up to global markets. She started her career in the factories of São Paulo’s manufacturing hub, where she witnessed the changes and investments that Brazilian firms were making in response to international competition: new equipment, integrated computer systems, optimized inventories, improved product design, and better management practices – all while hiring more educated and skilled workers.

“Manufacturing changed overnight,” Fieler said. “Young workers – who had left middle school to attend technical schools, in order to learn how to operate manual machines – were pushed out of the labor force and substituted by automated machines. The entire sector shrank, as firms laid off all these workers whose skills were obsolete.”

The Economy of Brazil, 1980 to Present: Problems & Possibilities

Fieler took part in a conversation with Edmar Bacha, IDE MA '65, Yale Economics PhD '68, as part of the celebration of EGC’s 60th anniversary celebration and 65 years of the International Development and Economics (IDE) Masters program.

The experience sparked Fieler’s initial interest in economics, and she left the private sector to pursue academia. During her Ph.D. program at New York University, she immersed herself in the field of international trade, studying firm-level data to explore how trade affects economic development.

“I became very interested in how firms advance, and how that impacts – negatively and dramatically – the job prospects for unskilled and uneducated workers,” she said.

Fieler was fortunate that one of her doctoral advisors was Jonathan Eaton ’73 M.A., ’76 Ph.D. – whose collaborations with Samuel Kortum ’92 Ph.D., now the James Burrows Moffatt Professor of Economics at Yale, had revolutionized the study of international trade in the early 2000s. Eaton and Kortum had developed an innovative framework for applying Ricardian trade theory to complex data, offering new tools and methods for conducting quantitative analysis on international trade.

Some say that developing countries today simply won’t have the same opportunities that East Asian countries had in the late 20th century. But I am not as pessimistic. –Ana Cecília Fieler

While the Eaton-Kortum framework initially focused on developed countries, Fieler began adapting it to developing-country contexts.

“The original models were very linear in their predictions,” she said, “but poor countries trade, produce, and consume very different goods than rich countries. In order to analyze the questions I was interested in – to highlight the differences between rich and poor countries, advanced and non-advanced firms, and skilled and unskilled workers – I needed to develop new models.”

Fieler published initial insights from these efforts in a 2015 paper with Marcela Eslava and Daniel Yi Xu. Using data from Colombia, the researchers built an economic model of how firms decide to adopt more advanced technologies – from machinery and equipment to internal communication systems and management practices. Unsurprisingly, firms engaged in international trade are more likely to upgrade their technology, since the relative demand for high-quality goods is higher in foreign markets. But Fieler and her coauthors also found that this led many non-importing firms to upgrade their technology, as well, simply because they were in the same production chain as importers and exporters.

"Some say that developing countries today simply won’t have the same opportunities that East Asian countries had in the late 20th century. But I am not as pessimistic."

Expanding on this analysis in a 2018 paper, Fieler and her coauthors quantified this “magnification effect” of international trade on the demand for skilled labor. Combining models with manufacturing data from before and after Colombia’s 1991 trade liberalization, they found that liberalization increased the labor market’s overall skill intensity from 12 to 16 percent – while decreasing sales by 7 percent, owing to increased competition from cheap foreign imports.

Analyzing trade and growth where it actually occurs: at the firm level

Fieler’s most recent paper, “O-Ring Production Networks” – with Banu Demir, Daniel Yi Xu, and Kelly Kaily Yang – builds on these insights by constructing a more integrated model of firm-to-firm interaction. The paper’s title refers to the malfunctioning component in the 1986 Space Shuttle Challenger explosion and Michael Kremer’s O-ring theory of production, in which the failure of a single task can dramatically decrease the value of output. Applying this rationale to firms and entire production chains, Fieler and her co-authors show how firms’ choices about technology, quality, and skill intensity are interconnected within their production networks and highly sensitive to the effects of international trade.

The research team used detailed data from Turkey, including information on firm-to-firm trade, international trade, and employees’ wages and occupations. Based on this rich dataset, they developed a quantitative model for how firms match. First, they showed that high-quality firms with skilled workers disproportionately buy and sell with other high-quality, highly skilled firms. Then they quantified how firm decisions about quality and skill intensity can propagate through production networks, finding that a 10 percent increase in one firm’s wages is associated with a 2.5 percent increase in its suppliers’ wages – a large number, given that Turkish firms have an average of 11 suppliers.

Fieler and her co-authors went on to show how international trade shocks – especially from richer countries – can amplify these dynamics over time. For example, if a Turkish firm experiences a sudden 5 percent boost in demand (or a “demand shock”) from a customer in Germany, the researchers’ data and model suggest that the exporting firm will respond by increasing its skill intensity, ultimately increasing wages by 0.21 percent. But if all Turkish exporters experienced a 5 percent demand shock, network effects would result in wage increases of 1.92 percent across exporters and 1 percent among non-exporters, due to indirect linkages.

Reflecting on the policy implications of this research, Fieler noted that these dynamics vary dramatically between countries, and many factors can limit the firm-to-firm benefits from international trade. To illustrate this point, she contrasted the experience of international trade in Latin America – which saw lackluster economic growth in the decades following trade liberalization – and that of East Asia, where export-led growth strategies produced rapid economic development.

Fieler’s coauthor Daniel Yi Xu put her contribution into perspective. “Cecília's research highlights that trade with richer economies could enhance quality upgrading not only by direct exporters but also by a broader set of domestic producers through their input linkages,” he said. “Using quite unique firm-to-firm transaction data, she illustrates the complementarity embedded in each firm's production process, meaning higher quality output requires high quality inputs. This novel mechanism places the 'quality' instead of 'scale' of trade at the center stage of economic development policymaking.”

Looking ahead, Fieler is upbeat about the prospects of developing countries to benefit from international trade.

“Some say that developing countries today simply won’t have the same opportunities that East Asian countries had in the late 20th century,” she said. “But I am not as pessimistic. If countries are now trying to diversify away from China, that could potentially be an opportunity for Latin American firms to finally engage in multinational production chains.”

More broadly – and amid fears of rising global protectionism in recent years, from Brexit to the US-China trade war – Fieler notes that her work offers ample reasons for optimism.

“What comes out of our research, and in the aggregate country-level data, is that even a small amount of international trade – as long as it is coupled with education – can make a big difference in a developing country’s advancement,” she said.

Greg Larson is a consultant and writer focused on economics, public policy, and social impact. Photos by Vestal McIntyre for EGC,