A large percentage of poor women in India lack access to digital bank transfers and ration cards, according to data analysis by Rohini Pande, Charity Troyer Moore, and Simone Schaner. In this editorial, the authors argue for expanded use India's food distribution systems to assist in Covid-19 relief.

A version of this article by originally appeared in The Indian Express on May 11, 2020.

The vast majority of India’s poor rely on daily wage labor for sustenance. India’s extended COVID-19 lockdown has deprived millions of daily laborers and their families of the income   they need to survive. In this unprecedented situation, the Indian state must respond swiftly to prevent widespread hunger and economic suffering.

The state is taking this challenge seriously: In April, India launched its largest ever cash transfer programme targeting women with PMJDY accounts and increased food subsidies, among other efforts. This week marks the release of the second tranche of three planned tranches of cash transfers. But what do data tell us about how these efforts are covering India’s poor?

Cash is easy to carry and widely accepted. But, our analysis of nationally representative survey data, described below, suggests that PMJDY-linked transfers will exclude many of India’s poorest. As India relaxes its lockdown, the immediate need remains distributing adequate food support to all the poor who need it, while redoubling efforts to identify how to use multiple elements of India’s social protection system to quickly provide the poor with economic resources. 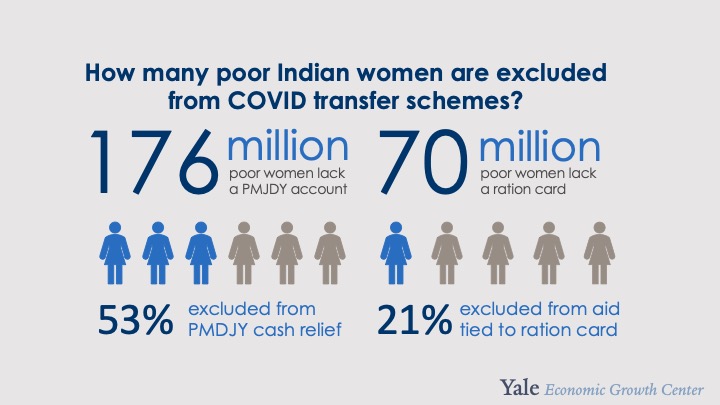 The cash transfer programme is sending Rs. 500 per month (roughly 7 dollars) to women with a PMJDY account in April, May, and June. According to official statistics, roughly 200 million Indian women (47% of adult females) have a PMJDY account.  Women’s own reports of PMJDY account ownership, however, paint a different picture. A nationally representative survey from 2018, the Financial Inclusion Insights Survey, asked respondents whether they have a bank account and, if yes, whether it is a PMJDY account. Roughly 80% of female respondents stated they have a bank account, but only 21% said they have a PMJDY account. What drives the gap between government and survey numbers? Likely some combination of dormancy, account duplication in the system and lack of knowledge among women about the type of account they hold. In recent interviews with women in Northern Madhya Pradesh, we repeatedly heard accounts of women not knowing if their account was PMJDY and of women unable to access information on this at the nearest bank kiosk.

To improve this, the government has planned information drives about cash transfers. Let’s say these emergency programmes mean that uninformed women learn that they have PMJDY accounts, and that duplication and dormancy issues are minimal. Will targeting the 200 million PMJDY accounts provide cash transfers to poor households that need it most - those that are running out of money and food due to the COVID lockdown?

Official statistics do not tell us how many of the 200 million female PMJDY account holders belong to poor households. Survey data takes us a bit further. The 2018 survey cited above uses a Grameen Foundation methodology, where answers to ten questions about a household’s characteristics and asset ownership are scored to compute the likelihood that the household lives below the poverty line. The result? The survey tells us that roughly two-thirds of adult women -- just over 325 million in total -- are living on less than a UN-recognized poverty criterion of US $2.50 per day.  In normal times, nearly 9 in 10 of these women say it would be difficult to pull together 6,000 Rupees within a month to deal with an emergency.

This means at least 125-175 million poor women and their households will not receive these emergency cash transfers.

A final constraint is accessing the cash: the 2018 data suggests that one in four poor women live more than five kilometers away from their nearest banking point. This, combined with current social distancing practices at banks that prolong cash distribution, suggests some women will find it difficult to access their cash transfers as soon as they need them. Indeed, recent reports of long lines outside banks highlight the struggles women are facing in accessing their cash. And while recent initiatives, such as India Post’s doorstep banking service, are a step in the right direction, they do not solve the broader challenge of PMJDY undercoverage.

In short, current coverage of the PMJDY account system is insufficient to reach India’s poor and stop millions of them from slipping through the social safety net. One way to address the coverage gap would be to expand the accounts eligible for transfers to include all accounts through which government transfers are made, the largest being MGNREGS. While promising, such an expansion would dilute the government’s aim of targeting women. Any such expansion would need to be explicit about the intended targeting of women and how it is being achieved. Alongside, it is important to look beyond cash to ensure households are able to meet their basic needs.

Access to food is the most pressing challenge during the lockdown and its immediate aftermath, when many individuals have suddenly found themselves unemployed and facing significant price inflation. The government’s established social protection architecture has also responded by expanding access to the public distribution system (PDS). But eligibility still largely relies on the household having a ration card, and the 2018 survey data suggests that nearly 70 million poor women live in households that lack ration cards.

Given the implications of the lockdown for those living hand-to-mouth, there is simply no time to screen and document poor, uncovered households. Nor is there time to be concerned about plugging holes in the food distribution architecture -- policy makers must make do with what they have. While there is a risk that some of these resources will make it to unintended beneficiaries, this is not the time to starve the poor to fight corruption.

India has ample reserves of grain and a well-developed system for disseminating stocks to PDS shops, which are generally accessible to poor households. Some states, such as Tamil Nadu, already offer universal access to rations. Releasing additional grain would give states latitude to expand PDS and support additional feeding efforts such as community kitchens. At the same time, states should do all they can to make sure lockdown measures do not prevent people from accessing subsidized food, while ensuring social distancing practices are in place.

The health and economic threats posed by the pandemic are unprecedented: India must draw on its resources to expand the reach of both cash and food transfer support to protect the health and welfare of its most vulnerable citizens.

Pande is the Henry J Heinz II Professor of Economics and director of EGC, Schaner is assistant professor (Research) of economics at University of Southern California, and Moore is director for South Asia Economics Research at Yale MacMillan Center.